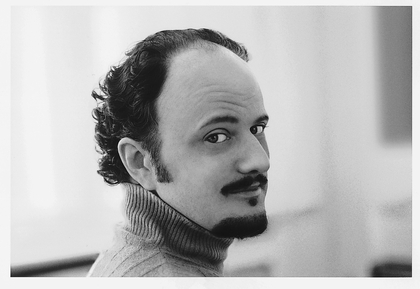 Jeffrey Eugenides is a wonderful writer.  I loved, and love, Middlesex.  But the recent interview he gave with Salon, specifically the bits about gender in the literary world, surprised and disappointed me.  It’s not his ignorance of the issue so much that bothers me; it’s his denial of it, the dismissive tone of his response, the unwillingness to engage in an analysis of his privilege beyond an offhand “You know, it’s possible.”  Yes, I know it’s possible.  VIDA knows it’s possible.  It’s more than possible.  How could the person who wrote Middlesex –– a novel about the permeability, and the cultural centralization of, sex and gender –– not believe in gender bias?

Eugenides argued that Zadie Smith is as well-respected and reviewed as Jonathan Franzen and the Great (White) Male Writers of his ilk.  I agree with him on that point… but that’s Zadie Smith.  One author.  Marie Curie discovered radium, but one wouldn’t look back on scientific history and claim that women were (or are) as respected or prominent in the field as male scientists.  I could list a handful more women writers held in high literary esteem (Margaret Atwood, Toni Morrison, Doris Lessing, Alice Walker) but the list would run out far, far sooner than the list of male authors regarded in the same light.

There’s a difference between the work that Franzen produces and that which Jodi Picoult produces, he said.  I agree with him there, too.  Picoult produces beach reads; Franzen produces heavy tomes about”the way we live now” (as Time famously hailed Freedom).   Personally, I don’t enjoy either writer’s work, but there is a clear difference in their sentence, character, and plot construction.  Franzen wins reviews; Picoult wins the “average” consumer.  But Jodi Picoult, in the notorious tweet that launched Franzenfreude 2010, said nothing about Jodi Picoult.  Nor did she say anything about the type of book that Jodi Picoult writes (nor the audience that reads them: typically cast as middle-aged, middle-class, and female, invariably mothers, belonging to a book club full of other mothers).   Picoult was talking about the difference in general between the way men and women are received in the literary world. To misunderstand this as Picoult “bellyaching” about her own work’s designation of low culture versus Jonathan Franzen’s as high culture seems intentionally simplistic and irresponsible.  It shrinks and delegitimizes Picoult’s point by ignoring her point.

Men write about divorce and it’s hailed as The Way We Live Now.  Women write about divorce and it’s hailed as Women’s Fiction.  Because why would someone who isn’t a woman want to read about them?  “[I]t usually has nothing to do with their gender,” Eugenides said, “it’s just the marketplace.”  But that’s exactly my point.  The marketplace itself skews toward the historically most common reader demographic: white men.  Work by writers of color is often expected to concern itself with their race or ethnicity, and when it does, it’s often marginalized –– if not by way of bookstore organization (e.g. “African-American Literature”), by way of cover art (Sociological Images has a good breakdown on this regarding work by writers of Asian descent).  These stories are othered.  We want to highlight the work, the idea goes, but we don’t see it as normative and don’t anticipate the author to receive a widespread American audience.

There are always exceptions –– Jhumpa Lahiri, for one –– but in my experience as a consumer that seems to be the case.  We didn’t even read multicultural authors when I was in public school, now that I think about it.  We read Harper Lee to learn about racism in the American South and Pearl S. Buck to learn about China.  Of course, I can’t speak to everyone’s experience, only my own.

Women writers may not have a designated area of the bookstore, but their work is still discriminated against and marginalized in the way it is marketed.  (Let alone how often it is reviewed, or even published.)  Meg Wolitzer’s article in the New York Times, referenced by Eugenides in the interview, rings true and valid.  Perhaps he should read it again.

Once, I had a writing teacher that told me I should write every day regardless of what was going on in my life.  “I don’t care if your mother dies,” she said, “you write through it.”

And then I graduated, got super depressed, and forgot all about her advice.

This post is Heather’s contribution to Molly Templeton’s How-To Issue.

Here’s Hannah, the third and final conductor on our ship of dreams.  Also, she’s a Best New Poet.  Just saying.

Hello Broad! peeps, my name is Hannah!  I think I will put an exclamation point after my name, just like Broad! does… perhaps this is not a sustainable goal…
To echo the sentiments of Heather, Brittany, and T.R. , it is my hope to do everything in my power to encourage women’s art and writing, and this seemed like a fabulous venue and opportunity for me to do that.  I really believe that it is important to encourage and highlight quality art from a diverse group of people, and it’s become increasingly more obvious to me that our world is a little lacking in that –particularly the world of publishing.
I live outside of Boston with my wife Melissa and we are busy getting ready for the birth of our first child!  Such exciting stuff!  I also teach writing at Pine Manor College in Chestnut Hill, and I’m working on a book of poems about the vice presidents of the United States.  It’s an exciting project, but it’s been taking me a long time to complete.  Poetry is one of my favorite things in the world, along with my wife, my family, my teddy bear, Reese’s peanut butter cups (fresh… stale ones are gross), and being with friends.  I also believe in the Oxford comma and smiling as much as possible.  If you want to know more about me, don’t be afraid to ask; I won’t bite!
I’m excited to be able to work with the amazing women at Broad! and looking forward to getting things rollin’.
-Hannah

It’s my opinion that the majority of (deliberate) bad things in the world occur for one of two reasons: either ignorance or basic lack of regard for other people.

I have a lot of feelings — disbelief, shock, fury — toward Missouri Rep. Todd Akin, who on Sunday claimed that women couldn’t get pregnant from “legitimate rape.”  As well as toward the Republican Party itself, which, while publicly distancing itself from Akin as fast as possible, just approved the official party platform for the current election cycle to exclude any abortion exceptions for rape, incest, or life of the mother.

Preaching to the choir here, but again: someone’s body belongs only to that person.  When you decide against someone’s wishes what can go in or out of his/her/hir body, that is not okay.  That goes for women’s bodies, but also for men’s.  Or genderqueer bodies.  That goes for anyone that wore the “wrong thing” or drank or knew their rapist.  Anyone who got pregnant and didn’t want to be.

I wrote a longer, more well-thought-out post on this last night, but when I clicked the “Publish” button, WordPress promptly decided to malfunction and lose my post.  Apologies for poor WordPress handling and any lack of articulation here.  I have rape fatigue — as I imagine you do as well.

Bottom line: please, please do not vote for someone this year that delegitimizes or flatly dismisses the rights or experiences of others based on ignorance, particularly due to reasons of religion or personal morality.

Our own Hannah Baker-Siroty, printed in the Summer 2012 issue of Broad! (readable/downloadable here or here) and now associate editor, has been chosen for this year’s edition of Best New Poets!  Her poem “Beekeeper Outside Escanaba, Michigan” will be published in November.  For the 2012 edition of the annual anthology, poet Matthew Dickman presided as editor.

Basically, Hannah is a brilliant writer and lovely person to boot, so I suggest you check out her work.  (And Matthew Dickman’s, for that matter!  His poem “Slow Dance” felt delicately beautiful enough that I wrote it out and posted it on my wall last year.  And obviously, he has good taste.)

A lot’s been going on behind the scenes of Broad! lately.  Lots of rustling in our pockets to find pens with which to take notes, scores of avocados devoured with lemon juice and pepper when we sat up brainstorming at computers.  Noisettes, Frank Ocean, Anais Mitchell to keep us awake late at night.  Changes are afoot.  But more on that in a few days.

The thing to remember right now is that submissions are open for the Winter 2012 issue.  (!!!) We’d like to read your work, if you let us.  The sub period will run until Saturday, October 13, 2012.  Anything submitted after that date will be considered for the Summer 2013 issue.  Please check out our submission guidelines!

The second issue of Broad! is now available for your reading pleasure!  We’re hosting on Issuu from now on, so you can read the issue there, download it off their website, or download it here. 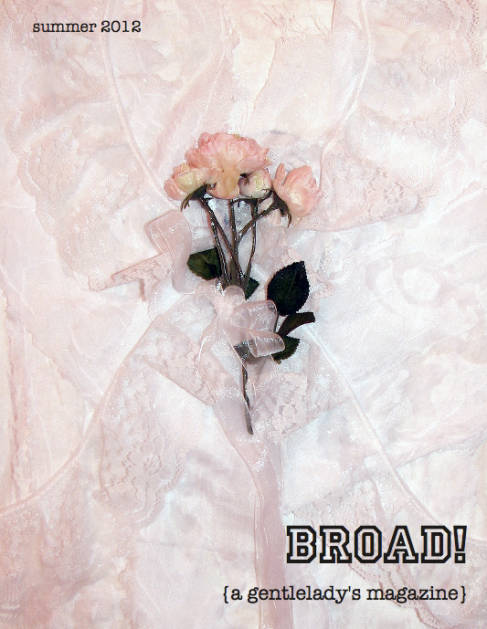 What are you waiting for?  Go go go!

Broad! is seeking an assistant editor.  Our current assistant editor, the excellent Emma Needleman, will be pursuing a Ph.D program in the fall.  Congratulations and best of luck, Emma!

Job duties and responsibilities include reading through submissions and assisting me in the review process.  Must be available for editorial meetings, whether in-person or via Skype.  (Telecommuting is workable, though not preferred.)  Occasionally, you may be asked to assist on layout.

This position is unpaid.  Broad! does not bring in enough money (read: any) that we can afford to pay our staff.

Interested applicants should please send a cover letter to Heather Lefebvre at broadzine [at] gmail [dot] com.  If you sound like a good fit for us, we will contact you to set up an interview.

*Broad! currently uses Scribus, an open-source software application, for its layout.  Scribus is available off its website as a free download for Windows or Mac.  I can train someone on the software if needed.

Emma and I have decided to extend the submission period for Issue #2 until Saturday, March 17 at midnight.  We could seriously use your stories, poems, personal essays, writing miscellany, artwork or photography.  Please send them to us!  We’ll love you forever.

The submission period for our next issue, Spring 2012, is well underway. It closes on March 10 at midnight, so get your pens/pencils/computers running!

You gentleladies are the best.

Broad! In the News